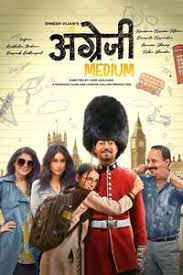 Irfan khan tweets about his film and make fans to know about his World Preimier Digital “Angreji Medium” film.Film is realeased on internet and Available on disnt+hotstar from today.

“Hop on to the dreamy roller-coaster ride with this father-daughter duo as we bring to you the World Digital Premiere of #AngreziMedium only on @DisneyplusHSVIP.”
An important character of this film Radhika madan also announced about it on her social media.

“Kya!? kya! ?kya!? Haan! Haan! Haan! We bring to you the World Digital Premiere of #AngreziMedium only on @disneyplushotstarvip.” Cationed on instagram by Radhika madan.

Karanjohar published a tweet and a small description of the film on social media saying “Such a special film #angrezimedium a film the entire family can see together and love and enjoy! At times like these, this is the sunshine we all need! Now streaming on @disneyplushotstarvip! Congratulations to my dearest friends #dineshvijan @maddockfilms and @homster for creating celluloid magic.”
Film has collection of 4cr till now.

Coronavirus: 105 released from Maharashtra emergency clinics up until this point

Img source- news18.comUpwards of 105 people, isolated for conceivable presentation to the novel coronavirus, have been released from emergency clinics in Maharashtra while four people are under perception, the state government said on Saturday. Two people are isolated at an emergency clinic in Mumbai while one individual each is admitted to separation wards of medical clinics […]

Rahul Gandhi claims that Congress Party is just the supporting and not the decision maker Party.

The Matka game slowly revives in Goa after the cash flow increases.

The Matka dens slowly open up and the betters return to the business again. However due to a long period of close down, It has started fresh from Monday. What is the Matka game? (The matka game of gambling in Goa):- The Matka game has been transmitted to India from the lottery form practiced in […]